Small cell lung cancer (SCLC) develops predominantly from neuroendocrine cells. Under normal culture conditions, SCLC cells grow in suspension and adhere only to a limited amount. Upon appropriate changes of the culture conditions (Fig. 1, I and II) adherent SCLC cells exhibit a neuron-like phenotype and reduce the proliferation rate. Around two thirds of all cell lines examined show these properties. - This approach could be utilized to develop new therapies.

Figure 1: When cultured on treated plastic surfaces, SCLC cells flatten (A). Appropriate modifications of the culture conditions lead to the formation of neurite-like extensions and a reduced cell division rate (B). The schematic views are exemplified by micrographs.

Tumor cells do not only act as individual cells, but also as part of a cell collective. Thereby they gain new complex behaviors that can not be simply deduced from single cells. For example, on unfavorable surfaces single thyroid tumor cells migrate only poorly or not at all (Fig. 2). In a collective, this deficit is compensated and the cells start to migrate. - What communication systems are the basis of this "swarm-like" behavior and how can it be disrupted or at least limited? 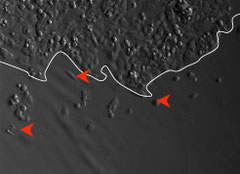 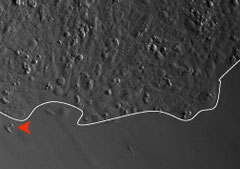 Figure 2: Selected time-lapse micrographs of a migrating collective of thyroid tumor cells at a time interval of 24 hours. Over time, the migration front has clearly moved downward. Single cells that are not integrated into the collective do not migrate (lower arrow), while individual cells that were integrated into the collective start to migrate (upper arrow; in the time-laps movie the migration course can be easily followed).

In scientific research tumor cell lines are routinely used, which grow in Petri dishes since decades, and, thereby, have collected a considerable amount of genetic changes. What represents such a tumor cell line? Is it still a cellular model for the primary tumor - and, if so, to what extent? In order to answer such kind of questions we study, in cooperation with the Malteser Hospital Bonn/Rhein-Sieg, how primary SCLC cells evolve in vitro (Fig. 3). For this purpose, cells are analyzed on the DNA ("genomic fingerprinting") and protein level (changes and modifications in the expression pattern, such as the activation of intracellular signaling cascades) after appropriate culture periods; i.e. up to one year. In addition, alterations in cell behavior (apoptosis, proliferation, resistance patterns, etc.) are also investigated.

The "non-classical stem cell model": The whole cell population consists of two subpopulations that can be generated, at least partially, from each other via cell division. The first one divides quickly and possesses a limited proliferation potential, whereas the second one divides slowly but indefinitely. In the context of a linear stem cell model the first subpopulation corresponds to "transient amplifying cells", the second one to "classical stem cells" (Fig. 4B).

Figure 4A: Fractal model - In the entire population, individual cells divide with different rates (here shown as a Gaussian distribution). From the descendants of a single cell, the entire variations in doubling times can be regenerated.

Figure 4B: Non-classical stem cell model - cell lines consist of two subpopulations that differ in their replication potential (limited vs. unlimited.) and their doubling time (fast vs. slow). During cell division, a daughter cell may gain properties of the other subpopulation, in particular, it may develop into a secondary stem cell (red ellipse). This possibility is not considered in the classical stem cell model.

With galectin-3 (an animal lectin, specific for β-galactosides) and Runx-2 (a transcription factor) we have identified two molecules that are expressed by tumor cells, but are absent in normal brain (Fig. 5). Due to their selective expression pattern both molecules could represent targets for new therapies.

Figure 5: The disruption of molecules selectively expressed by glioma cells may have a therapeutic potential. The micrograph shows the immunocytochemical detection of galectin-3 in a human glioma cell line (N.N. is a control element of a signaling pathway).

The effect of many agents used in tumor therapy is aimed to block the cell's own signaling cascades. When we studied the impact of selected drugs on the behavior of thyroid cancer cells, we found that one and the same substance can suppress the rate of cell division, while it increases the rate of cell migration (Fig. 6). - Such yin-yang effects should be considered in the treatment of tumors.